Many parents, teachers, and family members are often not aware of a loved one’s drug use or addiction even when the evidence of Paraphernalia is sitting right in front of them.

Based on the type of drug used, the method of using the drug, and access to money, the paraphernalia used can range from unassuming articles found readily available in the home to expensive and intricately-made pipes and water bongs for smoking marijuana.

It is important to understand the fundamentals of paraphernalia to be able to identify unfamiliar objects early on so drug use does not become an actual problem in your home.

Drug Paraphernalia and its Dangers

There is literally an unlimited number of the different types of paraphernalia that recreational users and addicts will use when taking drugs.

By law, the term paraphernalia implies “equipment, product or material of any kind that is intended or designed for use in:

Given the broadness of the definition, it is clear that drug paraphernalia is not limited to only a few objects. 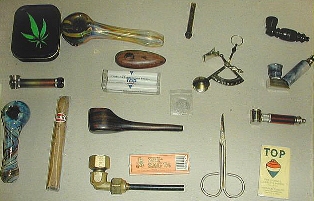 Most Used Drug Paraphernalia To Be Aware Of

It can’t be overstated that if you feel your teen or child is using drugs, it is extremely valuable to be able to identify the wide variety of drug paraphernalia that is being used today.

Pipes and bongs are frequently used to smoke marijuana as well as additional inhalable illicit drugs such as cocaine and methamphetamine.

Today they may look a little different then they did years ago. Pipe and water bong manufacturers have started creating many ways to hide paraphernalia in normal looking items that most parents would never even consider examining for drug use.

Take for example the JUUL device used for vaping nicotine. This e-cigarette cartridge is designed to look like a USB flash drive used for computers to conceal it from teachers and parents.

There are many stealth pipes used for smoking marijuana that are unassuming objects we wouldn’t give a second glance.

Bottles and storage containers can be used as cash bottles for storing money, medication bottles for hiding drugs, as well as tiny vials that are used to carry drugs and at the same time keep them hidden and fresh.

Many of these plastic bottles and storage containers are the size of 35mm film canisters from 20 years ago that were popular before digital cameras became popular.

Other items that are used for hiding substances are unfilled soda cans, cylinders of glue and inflatables.

Inhalants can be both paraphernalia and drugs used to get high such as Dust-Off computer cleaner and other similar items.

Inhalants are popular with teenagers, and while they are sometimes only a passing fad, in dire cases the can be addictive and cause serious health problems.

Needles and syringes are commonly used for intravenous drug use for drugs like heroin, cocaine, and meth. It’s important to also keep an eye out for unfilled glass containers, spoons and other medicinal gear if needles or syringes are found.

When people are doing intravenous drug use, it is an extremely bad indication that they are in an advanced stage of addiction and have moved up to the most dangerous drugs available.

Sometimes needles are used for non-recreational drugs such as steroids, but the side effects of this type of use will be obvious to see because of radical stages in size and appearance.

As a friend or family member, it’s imperative to observe and intervene in a proactive way to stop your loved one from using drugs if you suspect they are engaging in drug use.

Here is a PDF from PDF from The United States Department of Justice that provides more information about recognizing drug paraphernalia.