There’s growing scientific evidence that marijuana, especially potent concentrates and strains of the drug, can lead to significant mental health problems, including psychotic breaks such as Cannabis Induced Psychosis (CIP) or diagnosable schizophrenia, according to some experts.

While there are arguments among marijuana advocates surrounding these reports, government health officials are sounding the alarm. “It is time for Americans to understand there are substantial risks associated with using marijuana. This is not the government making up data,” the top mental health official at the Department of Health and Human Services, Elinore McCance-Katz has said.

Concerned physicians continue to point out data, such as a five year increase in suicides among 10 to 19 year olds in Colorado, a state where recreational cannabis is legal, to make their point.

In Massachusetts, a group of health professionals is lobbying the state government to include mental health warnings on marijuana packaging, citing a study in The Lancet that found first-time marijuana users in Amsterdam were at a 50 percent risk of experiencing a psychotic break.

A person experiencing an episode of psychosis has had a mental break with reality, very often seeing or believing things that do not actually exist.

This is a very serious mental health episode and can be incredibly frightening not only for the person suffering from a psychotic break, but for those around them as well.

Generally, psychosis is associated with conditions like schizophrenia and bipolar disorder. What can be confusing is that psychosis is not a disease in and of itself, but a symptom of a bigger psychological condition.

People suffering from psychosis may exhibit and experience some of the following behaviors:

What is Cannabis Induced Psychosis and How is it Diagnosed?

Cannabis Induced Psychosis shares many of the same signs of primary psychosis except the symptoms are caused as a result of smoking or eating marijuana.

If a person exhibits the symptoms of an onset of psychosis, it’s necessary for the treating physician to ask whether the patient has recently used marijuana. If they haven’t used it recently or ever, cannabis induced psychosis can be ruled out as the precipitating cause.

The primary sign that a person is suffering from cannabis induced psychosis is whether or not they test positive for cannabis while being treated for a psychotic episode.

A particularly high dose of THC, the main psychoactive ingredient in marijuana, can cause a sudden onset of psychotic symptoms, but problems can manifest as much as 24 hours or up to a week after cannabis consumption.

Chronic or heavy pot use in the past month can also be a sign that a patient is suffering from CIP.

People who are predisposed to mental illness, those who battle depression, anxiety or struggle with illnesses like bipolar disorder or schizophrenia, are at an even greater risk for marijuana-induced psychosis.

If a person has not used marijuana, then the treating physician can use diagnostic criteria to analyze for primary psychosis.

Physicians can also prescribe a range of antipsychotic medications that will help alleviate the symptoms in the short term while the marijuana is detoxed out of the system.

Long-term recovery, however, depends on a person’s willingness to abstain from marijuana use. 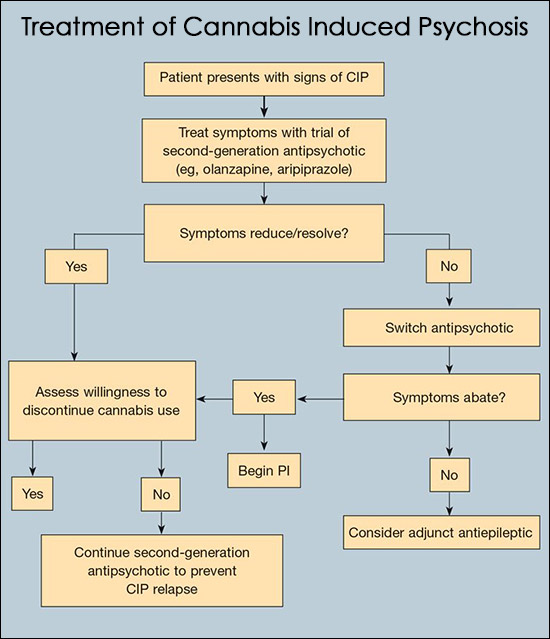 For patients that find it difficult to stop using marijuana, addiction treatment for a cannabis use disorder can be effective.

With a combination of one-on-one counseling, group therapy and skills-based approaches like cognitive behavioral therapy (CBT), a person that once suffered from cannabis induced psychosis can start to understand the underlying cause of addiction and create a successful strategy for ongoing mental health and sobriety.

Cannabis Induced Psychosis can be a frightening experience for anyone, but fortunately it is short-lived if the patient is willing to stop using marijuana.

11 Negative Side Effects of Marijuana

Is it Safe to Mix Marijuana and Antidepressants Like Lexapro and Weed?

PrevPreviousSeeking a Psychological Assistant for a Primary Therapist position
NextWhat is the Role of Nutrition for Addiction Recovery?Next