The number of states with medicinal and, now, recreational marijuana laws is – no pun intended – growing. It’s therefore not surprising that with greater availability to pot, the number of people using it has spiked. Despite new state laws an avalanche of criticism and the numerous negative side effects of weed and cannabis, the Drug Enforcement Agency decided to keep marijuana listed as a schedule I narcotic. 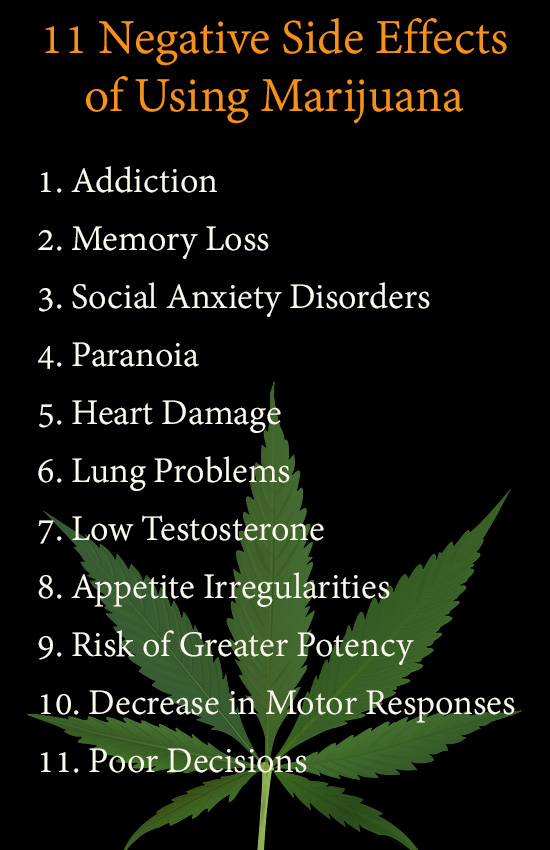 One major downside to this decision is the lack of information about the potential side effects of marijuana use. Because the federal government categorizes pot as having no medicinal value and a high likelihood for abuse, research grants related to weed consumption are sparse.

Even without a lot of research, though, experts do know that marijuana use is not totally consequence-free as it relates to people’s physical health and wellbeing.

What are the Side Effects of Weed and Using Marijuana?

Some of the negative effects of weed and cannabis below might be controversial to some, but each person is different and will be impacted in their own individual way.

Both are true, especially as it concerns younger, long-term users who started their habit on potent strains with high THC, the psychoactive ingredient in weed.

A study that followed more than 3,000 American pot users over a 25-year period discovered that people who used weed on a daily basis for five years or more developed a “poorer verbal memory in middle age than people who didn’t smoke, or smoked less.”

Many users will agree that they have had bouts of not remembering something that happened at some point while high.

A committee appointed by the National Academies of Science, Engineering and Medicine assessed marijuana-usage data and reports that regular use can lead to mental health issues such depression, anxiety and even schizophrenia.

A study conducted at the University of Oxford found that the psychoactive element of pot, THC, can lead users to feel a sense of paranoia as a result of the changes in their sensory perception.

Sometimes the strain of marijuana smoked can have an impact in this area, with certain strains causing more paranoia than others.

Though the stereotype is that pot mellows people out, it can also significantly raise a person’s heart rate for up to three hours.

One study found that people who use pot are “26 percent more likely to have a stroke at some point in their lives than people who didn’t use marijuana.”

According to the Alcohol and Drug Abuse Institute, pot has a similar range of chemicals to tobacco when smoked.

Long-term use, notes the institute, increases the risk of serious respiratory issues, such as airway inflammation, wheezing and an increase in mucus coughed up from the respiratory tract.

High levels of THC, found in many of the more modern strains of pot, do cause the body to produce lower levels of testosterone.

Low testosterone can lead to sluggishness, weight gain and a diminished libido among other side effects. Fortunately, testosterone levels generally return to normal when marijuana use is stopped.

Cannabinoids effect cells in the brain that have to do with appetite. These cells, which normally tell the brain that the body is full, transform and cause feelings of hunger.

With lax regulations on marijuana products, certain strains of marijuana have incredibly high rates of THC compared to pot from just 20 years ago.

Between 2013 and 2014, shortly after Colorado legalized recreational weed, emergency room visits doubled, mostly as a result of potent edibles.

The National Institute on Drug Abuse (NIDA) reports that “marijuana significantly impairs motor coordination and reaction time,” which is a detriment, most especially while driving, but can be a factor in other types of preventable accidents as well.

While there’s been no recorded fatal overdose as a result of weed, there’s no question that many people think differently while “high” as opposed to when they’re sober.

This doesn’t always lead to the best decisions, whether it’s eating too much, getting behind the wheel or deciding to stay “high” all the time.

Will Marijuana Addiction Become a Problem?

While marijuana is widely recognized as being much safer when compared to alcohol and other drugs, it can still cause many of the health issues described above.

Most marijuana users will agree that they have experienced some, if not many of these negative side effects of weed at any given time.

Now that marijuana is recently legal in many parts of the country, time will tell if the most debated of these side effects – addiction – will become more serious than anyone expected. Inspire Malibu is the premier Non 12 Step, drug, alcohol, and detox treatment center in Malibu California led by board certified addiction specialist Dr. Matthew Torrington, MD. Our state-of-the-art treatment program combines the latest scientific research with proven, evidence-based therapies to address both alcohol and substance abuse successfully. Inspire Malibu is Joint Commission (JCAHO) accredited , Legit Script Certified, and has been designated a Higher Level of Care from the Department of Health Care Services. We are also uniquely qualified to address dual diagnosis disorders.
PrevPreviousHolidays in Recovery: Can You Get Drunk on Non-alcoholic Beer?
NextPortugal’s Decriminalization Success for Addiction and Drug AbuseNext