Millions of Americans are touched by substance use and mental health issues every single day. People in the throes of conditions like depression, anxiety, bipolar disorder, post-traumatic stress disorder, addiction and many others are often in great pain and see no way out of their situation. 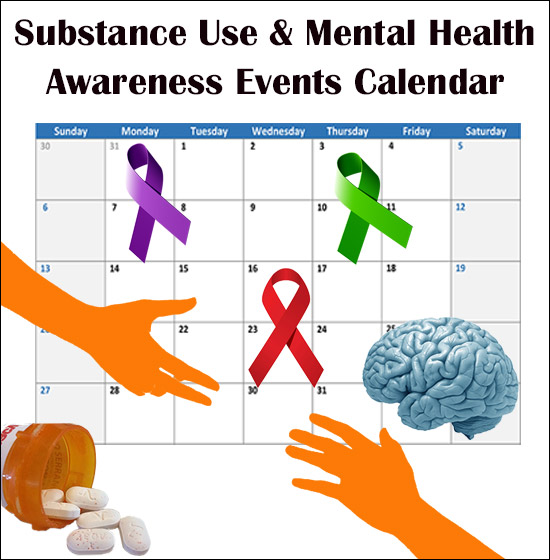 Friends, family members and colleagues also suffer. Often, they see the symptoms of these issues before anyone else and struggle to find help for their loved one.

Because of the stigma associated with mental health and addiction issues, people who know they’re suffering are often frozen with fear and shame. As a result, they decide not to ask for help and sink further into hopelessness.

However, with treatment, many people make a full recovery. The key is to know where and how to find the right help. The good news is that there are countless agencies and organizations dedicated to educating people and helping those in need find the resources and treatment they deserve, all with expertise and compassion.

Below is a list of substance use and mental health awareness events by month that provides useful information and tools so everyone can live a better life.

Dry January is recognized as a time for abstaining from alcohol for the first month of the New Year to promote healthy activities and a fresh start. This works well for people who are “sober curious” and want to see how taking a break from drinking alcohol can have an impact on their life.

The National Institute on Drug Abuse (NIDA) previously designated a week every January as National Drug and Alcohol Facts Week. The weeklong campaign provides toolkits and communities hold awareness events that are open to anyone.

The goal of Random Acts of Kindness Week (RAK Week) is to bring people together through acts of kindness.

National Eating Disorders Awareness Week (NEDA) is recognized every February as a way for people to connect with others affected by eating disorders and share their experiences. NEDA occurs at different times of the month in the U.S. and Canada, but both countries observe it.

Nearly 15 percent of teenagers and 4 percent of adults suffer with this mental health condition. Self-harm is a non-suicidal form of hurting oneself – cutting, burning, hitting themselves – so that their physical pain mirrors their psychological pain.

Self-injury Awareness Month is promoted and supported by organizations such as LifeSigns and the Self-Injury Foundation.

Learn more about Self Harm and Injury Awareness Month.

In 2021, Inhalants & Poisons Awareness Week will be observed from March 22 to 28 to raise public awareness about inhalant abuse, which affects users as young as 10 years old.

Nearly 6 million people in the United States alone are impacted by Bipolar Disorder and it is not easy to diagnose. World Bipolar Day is recognized every year on March 30 to bring attention to this often misunderstood mental health issue.

For the past 28 years, the National Council on Alcoholism and Drug Dependence (NCADD) has promoted this event to bring attention to the serious consequences that alcoholism has on individuals, families and the community as a whole.

Not all stress is bad, but bad stress is not good. The consequences of unmanaged stress can lead to a range of unhealthy psychological and physical issues.

The American Psychological Association (APA) lists some of the most common stressors. Even if it’s not April, learning how to manage stress will lead to a healthier overall life.

The National Institute on Drug Abuse (NIDA) designates a week every January as National Drug and Alcohol Facts Week. The weeklong campaign provides toolkits and communities hold awareness events that are open to anyone. This event has been moved from January to March 30 to April 5, 2020.

The Drug Enforcement Administration (DEA) has been hosting the National Prescription Drug Take-Back Day each year since 2010, which is scheduled for the last Saturday in April (and October).

May has long been used to educate the public and reduce the stigma associated with mental health issues, so much so that the White House, in 2014, decreed May as National Mental Health Awareness Month. More than 42 million Americans live with or will experience a mental health condition in a given year.

May has been recognized as Borderline Personality Disorder Awareness Month since 2008 to foster awareness about this condition that impacts approximately 6% of the population.

The first week of May is also devoted to giving a voice to children that suffer from mental health conditions. The National Institute of Health reports that half of lifetime cases of mental illness start by the age of 14.

A useful toolkit for this awareness event is provided by the National Federation of Families for Children’s Mental Health.

World No Tobacco Day (May 31st)

The World Health Organization and its partners use this day to highlight the damaging health consequences of tobacco use and to promote policies that will reduce the worldwide consumption of tobacco.

It’s estimated that as many as 8 percent of Americans suffer from post-traumatic stress disorder (PTSD). This condition is the result of being a victim of, or even a witness to a traumatic event, such as violence, tragic accidents and sexual assault and abuse among others.

The U.S. Department of Veterans Affairs is among the many organizations that teach people how to seek help for this serious disorder.

The entire month of June is dedicated to men’s health, with a focus on Men’s Health Week during the week leading up to Father’s Day.

In its 17th year, August 31st is set aside to remember those who lost their lives as a result of a drug overdose and for survivors to share their stories, in hopes of preventing more unneeded deaths.

The Overdose Awareness Day website provides resources and educational materials for people to learn more about this ongoing issue.

For more than 30 years, the Substance Abuse and Mental Health Administration (SAMHSA) has promoted this event to lift the voices of those in recovery and raise awareness about how treatment can help those living with substance or mental health issues.

SAMHSA’s website lists the theme each year and provides resources for organizations and partners to promote the event.

An estimated 74 million Americans live with pain that lasts for more than 24 hours, and chronic pain is a leading cause of disability in the U.S. In September, organizations devoted to pain treatment and reduction aim to educate the public about these difficult conditions and to promote newer and safer treatments.

September 6 to 12, 2020, is set aside to observe the preventable tragedy of suicide, the 10th leading cause of death in the U.S. according to the Centers for Disease Control and Prevention.

Organizations such as the American Foundation for the Prevention of Suicide (AFSP) use this week to promote education on the signs of depression and other conditions that can result in suicidal tendencies. AFSP also provides information and resources about how to prevent these tragedies.

On September 10th, the International Association for Suicide Prevention (IASP) and the World Health Organization (WHO) partner to raise global awareness about the estimated 800,000 annual deaths because of suicide.

IASP’s website provides resources in different languages so that countries from across the globe can participate in this awareness event.

According to the National Institute of Mental Health (NIMH), more than 16 million adults in the U.S. battle depression. This month-long awareness campaign provides the opportunity for people to realize they’re not alone in struggling with depression. It’s also an easy time to learn about the root causes of depression and how to seek treatment.

Education and prevention is still the most effective method to keep youth from developing substance abuse issues, which is why Congress, in 2011, declared October as National Substance Abuse Prevention Month.

Research has shown that for every $1 invested in school-based education programs, there is a significant reduction of costs associated with health care and law enforcement.

October 4 to 10, 2020, is designated by the National Alliance on Mental Illness (NAMI) and its partners to reduce the stigma and misunderstanding so often associated with mental illness. NAMI’s website promotes their yearly campaign and provides resources for those that want to get involved.

With events hosted on college campuses, military bases and in communities around the country, this event takes place during Mental Illness Awareness Week.

Volunteers offer optional depression screening tools for those who want it and provide information and resources for private screenings at Help Yourself. Help Others.

The World Federation for Mental Health uses October 10th as a way to combat the isolation, discrimination and stigma associated with mental health conditions. “There is no health without mental health,” is the Federation’s motto and their website provides information and resources for this annual observance.

The third week of October is an annual opportunity, promoted by the National Highway Traffic Safety Administration (NHTSA) to learn about teen driver safety issues.

Vehicle crashes, sadly, are the leading cause of death for aged 15 to 19 so it’s important to help prevent these crashes in the first place.

Sponsored by Drug-Free America and the National Family Partnership (NFP), October 23 to 31 is set aside each year to kick-off a red ribbon campaign that symbolizes a commitment to raising awareness around the consequences of drug abuse.

NFP’s website acts as a hub for the theme of each campaign and provides resources for people and communities that want to hold events.

The Drug Enforcement Administration (DEA) has been hosting the National Prescription Drug Take-Back Day each year since 2010, which is scheduled for the last Saturday in October (and April).

The third Thursday of every November, for more than 40 years, has been an opportunity for people to join others in quitting their tobacco habits, whether it’s cigarettes, smokeless tobacco, and even vaping.

The American Cancer Society sponsors this annual event and offers tools, resources and strategies for people to improve their health by living tobacco-free.

Unfortunately, rates of driving while impaired have increased, according to a 2016 presidential report.

The rise in states allowing for medicinal and recreational marijuana is definitely one reason the roads aren’t as safe as they should be. As the holidays are in full swing, this awareness event is an excellent way to raise the potentially tragic outcomes of driving while under the influence of drugs, alcohol, prescription or even over-the-counter medications.

What are Common Types of Dual Diagnosis Disorders?