The Dangers of Abusing Ketamine – Falling Into the K-Hole

If your first thought is about a bowl of cereal after hearing the phrase “Special K,” you’re likely not a college or high school aged party animal.

Slang for the drug Ketamine, “Special K” is classified as a fast-acting, but short-lasting, dissociative anesthetic that produces an “out of body,” psychedelic type high comparable to LSD and PCP.

Similar to its closest cousins, taking ketamine can be very dangerous and even deadly. 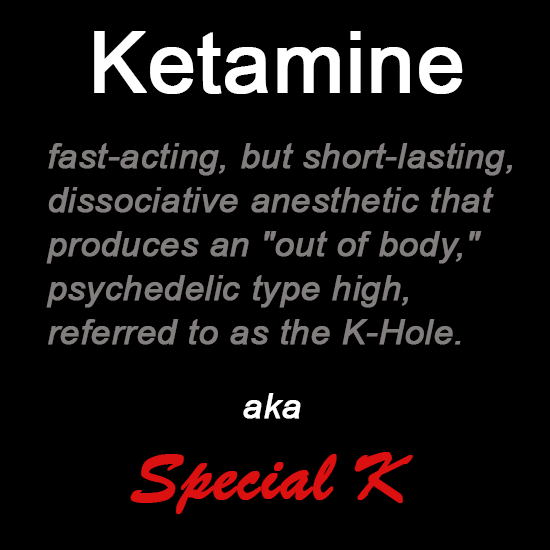 Most often used as an animal tranquilizer in veterinary clinics, ketamine can also be administered to humans before medical procedures that require a patient to be unconscious.

When ketamine is being sold on the street, however, more often than not, the supply of ketamine has been stolen from veterinary offices and cut with other substances.

What are the Side Effects of Ketamine When Used Recreationally?

Manufactured as a clear injectable liquid, “Special K” is generally evaporated to make a light colored powder. The method of ingesting ketamine depends on the user. It can be snorted, inhaled in a cigarette or a marijuana joint and injected into either a vein or the muscle.

Ketamine is also odorless and tasteless. It can easily be put into a drink or on food undetected, making a person go unconscious or become extremely lethargic, and therefore vulnerable to sexual assault. For this reason, ketamine is considered in the class of “date rape” drugs.

A large dose of ketamine, either injected or snorted, can cause what users refer to as the “K Hole Effect.” This is when a person taking “Special K” first experiences the inability to move, followed by a disconnect from physical sensations as hallucinations begin to take shape.

The “K-hole effect” can put a person in a state of paralysis that could shut down respiratory and circulatory functions, and make it impossible to move if vomiting is induced. Both situations can be fatal.

Some of the Negative Physical Side Effects of Ketamine Use Include:

The National Institute on Drug Abuse (NIDA) reports that teenagers and young adults most often abuse club drugs, like ketamine.

While ketamine itself is not physically addictive, users can build a tolerance, having to take more and more to achieve the same high.

Just like with LSD and PCP, data suggests that users can get psychologically addicted to ketamine’s effects.

Because withdrawal from chronic ketamine use can cause depression, double vision, hearing loss and an increased heart rate among other symptoms, treatment should be monitored by medical professionals.

Additional counseling is also useful in dealing with any underlying psychological issues that might be driving destructive behavior.

While it might be fashionable in some circles to attend music festivals, concerts or nightclubs and use ketamine to intensify the experience, users should understand the potential risk for overdose and addiction.

GHB Addiction: Once an Anesthetic, Now a Club Drug of Abuse

Inspire Malibu is the premier Non 12 Step, drug, alcohol, and detox treatment center in Malibu California led by board certified addiction specialist Dr. Matthew Torrington, MD. Our state-of-the-art treatment program combines the latest scientific research with proven, evidence-based therapies to address both alcohol and substance abuse successfully. Inspire Malibu is Joint Commission (JCAHO) accredited and has been designated a Higher Level of Care from the Department of Health Care Services. We are also uniquely qualified to address dual diagnosis disorders.
PrevPreviousThe Use and Abuse of Benzodiazepines, aka Benzos
Next51 Random Acts of Kindness and Why They MatterNext