With some of the nation’s strictest alcohol laws already on the books, Utah doubles down by lowering the threshold for motorists that can be charged with driving while under the influence. 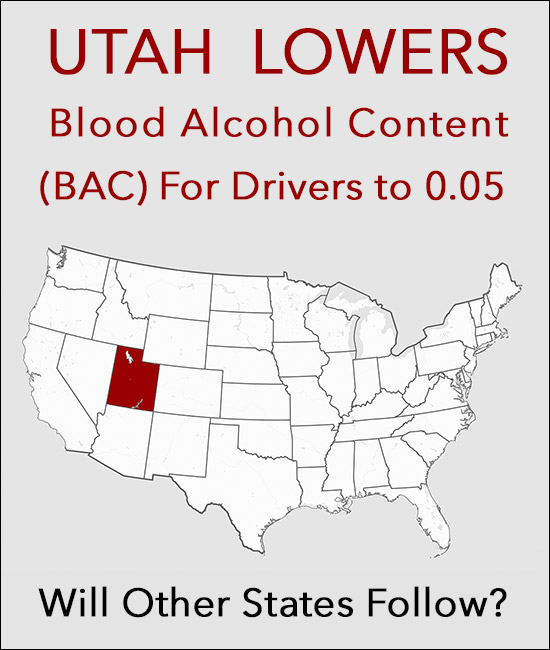 To get a picture of what exactly that looks like, a 160-pound man can reach 0.05 BAC with just three alcoholic drinks consumed in less than an hour.

For women, it can take even fewer drinks in the same time to reach Utah’s new legal limit for being intoxicated behind the wheel.

Alcohol affects each person differently, and some of the factors that determine blood alcohol content include:

“Policymakers in other states should follow Utah’s lead to reduce alcohol-related deaths and Congress should incentivize these changes,” writes Stephanie Morain, an assistant professor at the Center for Medical Ethics and Health Policy at Baylor College.

She is also the lead author on a study about the ethics of changing the national BAC standard.

Morain and others, like the bill’s sponsor, Utah State Rep. Norm Thurston, a Republican, point to the still dire drinking and driving related statistics.

According to Mothers Against Drunk Driving (MADD), some of these stats include the following:

Arguments For and Against Changing the Legal Drinking and Driving Limit

There are, of course, critics of Utah’s BAC legislation that feel the new law infringes on a people’s individual freedoms and that the state is criminalizing even moderate, responsible alcoholic consumption.

Advocates of the 0.05 BAC, however, aren’t buying that argument.

“A person can still drink as much as they want, just not get behind the wheel,” Morain said in an interview with The Salt Lake Tribune. “Our society has made it increasingly easy to find a safe ride home through ride-share applications and other resources.”

Sgt. Nick Street with the Utah Highway Patrol told NPR that he’s already seen a change in drunk driving behavior due in part to ride-share apps, like Lyft and Uber.

“I think people are making better decisions on the front end of a night,” Street said.

Another key statistic, according to MADD, is that about a third of drivers convicted of drunk driving are repeat offenders.

Continued DUI violations or alcohol associated run-ins with law enforcement is a strong indication that a person might be struggling with alcohol dependence or is need of alcohol rehab for alcoholism.

Under age drinkers, 16 to 20 years old are particularly susceptible to DUI incidents.

The Centers for Disease Control and Prevention (CDC) reports that under age drinkers are 17 times more likely to die in a car crash when they have a BAC of 0.08 percent than when they have not had a drink.

Utah Leads the Charge Against Drinking and Driving

Utah is taking action to reduce the number of alcohol-related fatalities that occur behind the wheel.

It’s not the first time the state has led the charge either.

In 1983, Utah became the first state to reduce the legal limit from 0.10 percent to 0.08, a move that took about 20 years for every other state to follow.

By the time the legal limit had been reduced across the country, traffic deaths due to driving under the influence of alcohol had decreased by 10 percent.

Delaware, Hawaii, New York, and Washington state have all considered lowering the legal drinking and driving limit in the past, but to date, none of them have implemented it.

Whether or not states will be quicker to follow Utah’s latest move is yet to be seen, but at least the bill’s sponsor has a very clear view of the new law.

“People have a fundamental right to freedom and liberty,” Rep. Thurston said in an interview, “until it starts to affect the health, safety and welfare of people around you.”

Inspire Malibu is the premier Non 12 Step, drug, alcohol, and detox treatment center in Malibu California led by board certified addiction specialist Dr. Matthew Torrington, MD. Our state-of-the-art treatment program combines the latest scientific research with proven, evidence-based therapies to address both alcohol and substance abuse successfully. Inspire Malibu is Joint Commission (JCAHO) accredited and has been designated a Higher Level of Care from the Department of Health Care Services. We are also uniquely qualified to address dual diagnosis disorders.
PrevPreviousHow Does Alcohol Affect Aging? A Quick Guide to the Damage Caused by Excessive Drinking
Next9 Celebrities & Famous People With OCD (Obsessive-Compulsive Disorder)Next