At this point, virtually everyone of a certain age is aware that marijuana is more mainstream than before. Twenty-three states, including the District of Columbia, have legalized medicinal marijuana. Out in front of the country are Colorado, Alaska and Oregon, the states in which recreational marijuana use is now entirely legal. 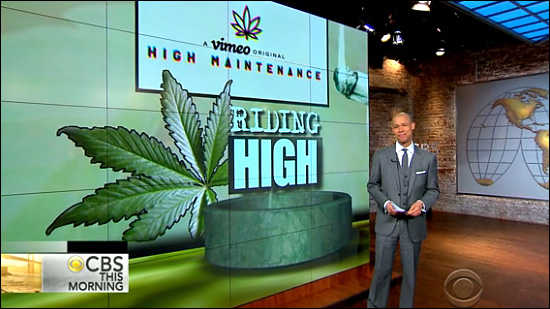 Making recent news, though, is “High Maintenance,” a first of its kind marijuana centered web-series on Vimeo that opponents are criticizing for promoting the drug. In an interview with CBS News, Ben Sinclair, who co-created and stars in the series, suggested that the show normalizes marijuana use. His wife and fellow-creator, Katja Blichfeld, said, however, the show might indirectly be promoting marijuana.

The National Institute on Drug Abuse (NIDA) reported that 35 percent of high school seniors smoked pot at least once last year. While this is slightly down from 2013, recent studies have shown marijuana use in young adults, those under the age of 25, can alter natural brain development.

NIDA also estimates that 9 percent of people who use pot will become dependent on it. With more weed on the streets than ever before, critics suggest that shows like “High Maintenance” are making a potentially damaging and addictive habit more attractive.

Currently shooting its second season, the show got picked up and financed by Vimeo, a video-sharing website, similar to YouTube, that’s now venturing into the world of original programming.

Audiences watch as “The Guy,” the show’s main character, rides his bike around Brooklyn delivering pot to seemingly normal people, such as a middle-aged woman dealing with cancer or a cross-dressing male client.

The married duo that created “High Maintenance” consent that the show’s characters are people “with eccentricities.” They also added, “We are saying that just because a person uses a substance that doesn’t define them as who they are.”

Marijuana in the Movies and on Television

Marijuana related movies and television shows are not a new phenomena. “Weeds,” a premium cable show about a widowed mother who began selling pot to support her two children ran for nearly a decade.

There have also been movies like “Dazed and Confused” or any number of “Cheech and Chong” films. The difference between those shows and “High Maintenance,” some are complaining, is the access that a younger audience will have to the online series.

According to a New York Times piece titled “Youths Are Watching, But Less Often on TV,” the trend for young Americans, ages 12 to 34, is a migration toward online content rather than traditional broadcast and cable television.

“High Maintenance” hasn’t suffered from the criticism. A Vimeo executive pointed that the series, which costs $1.99 per episode to stream, made more in two days than it would have made if it had been released under YouTube’s license agreement. The show’s success in the first season is what prompted Vimeo to fund a second season.

Legalized use of marijuana is gaining momentum, and some feel that it’ll eventually be decriminalized on a federal level. Parents, as well as those in recovery from drugs and alcohol, will have to up their vigilance now that the weed-centered entertainment has reached the digital realm.

Inspire Malibu is the premier Non 12 Step, drug, alcohol, and detox treatment center in Malibu California led by board certified addiction specialist Dr. Matthew Torrington, MD. Our state-of-the-art treatment program combines the latest scientific research with proven, evidence-based therapies to address both alcohol and substance abuse successfully. Inspire Malibu is Joint Commission (JCAHO) accredited and has been designated a Higher Level of Care from the Department of Health Care Services. We are also uniquely qualified to address dual diagnosis disorders.
PrevPreviousWe Were Wrong About Smoking – It’s Worse Than We Thought
NextA Famous Father Hits Back After a Cyber-Bullying Attack on His DaughterNext