Project Semicolon is a nonprofit dedicated to the prevention of suicide. Founded in 2013, the organization has helped millions of people and believes suicide is generally preventable and is the collective responsibility of each and every person on the planet.

Suicide, tragically, is all too common. Not only is it a sign that someone’s suffering was so intense they felt it necessary to end their life, but it leaves in its wake a trail of additional victims: friends, family, loved ones, and entire communities.

September Is National Suicide Prevention Month and it’s recognized as a time to learn more about mental health and other areas of life where people might be having trouble coping.

It’s also a good time to find resources to help those dealing with depression and other issues that might lead them to consider ending their life.

It’s not a happy subject, and some might take offense to the mere notion of it, but it’s something that we all must open up and talk about with friends and loved ones we hold dearly in our heart. 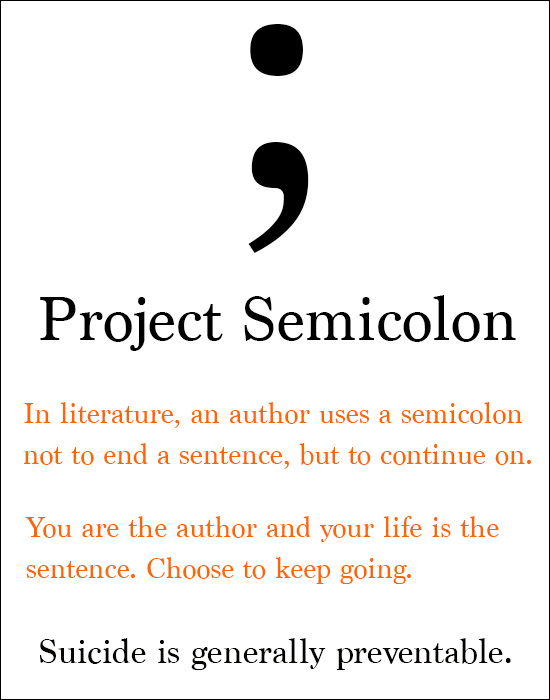 “In literature, an author uses a semicolon not to end a sentence, but to continue on,” Amy Bleuel, the creator of Project Semicolon, told The Mighty in 2015. She added, “We see it as you are the author and your life is the sentence. You’re choosing to keep going.”

Amy used the semicolon symbol as a way to honor her father who died from suicide and as a way to help others dealing with depression and mental illness find hope.

The year 2017 witnessed two high-profile suicides. Chris Cornell was the first, and one of the original creators of the rock genre “Seattle Grunge” and front-man for the iconic band Soundgarden, as well as Audioslave. At Cornell’s funeral in May, the lead vocalist for the rock band Linkin Park, Chester Bennington, said a few words…

“My name is Chester. I had the great privilege of being a friend of Chris and invited to be a member of his family,” Bennington told the mourners at Hollywood Forever Cemetery. Just two months later, in July, Bennington took his own life at his home in Los Angeles.

Mental illness and suicide have become such a part of the zeitgeist that the video-on-demand service Netflix produced a somewhat controversial series in 2017 called “13 Reasons Why.”

The show was about a suicide victim, a young woman, who left recordings for a boy she had a crush on, with 13 reasons why she took her own life. Television shows and films about mental illness are not new, but they can be a valuable tool that raises awareness around the issue of suicide.

The Statistics of Suicide

Emory University in Atlanta, Georgia puts into perspective the disconcerting statistics on suicide. These include some of the following:

Why Do People Consider Suicide?

There are any number of factors that can play into why a person might consider suicide: from addiction to alcohol and drugs to depression, bipolar disorders or even eating disorders, such as anorexia.

Complicating matters is the fact that a vast majority of people living with mental illness use alcohol and drugs to self-medicate, which can lead to addiction and magnify whatever mental disorder is plaguing them. This is known as a dual diagnosis or a co-occurring disorder.

Both mental illness and addiction are treatable conditions that people can recover from. Each illness though, must first be diagnosed, which isn’t always a simple matter of seeing a family physician before the conditions can be treated individually.

In many cases, addiction and mental illness are chronic diseases and must be managed with medication, counseling, self-care and support.

Episodes of depression can cause relapses and vice versa, leading to guilt and shame and thoughts of suicide.

Project Semicolon notes that 75 percent of suicide victims share their plans ahead of time. Therefore, it’s incumbent on friends, family, educators and everyone to reach out to those they believe might be struggling. Even small actions can make the difference to saving a person’s life.

Sadly, 31-year-old Amy Bleuel, Project Semicolon’s founder, lost her more than 20-year fight with mental illness and took her own life. Michael Shields, CEO of the project, had this to say:

“Today, although sad, we’re reminded of the reason why Project Semicolon exists. Suicide has the ability to strike at the heart of the very cause it aims to eliminate it. Today we lost a giant and from this day on, together, we’ll carry her legacy forward.”

The Project Semicolon website is full of resources for learning about the different forms of mental illness like depression, anxiety, bipolar, and many others, along with warnings signs to watch for in yourself and others.

It also offers mental health screening tests for the following:

There is no shame in having mental health or addiction issues, and they are more common than most people realize. But the good news is, treatment is available for those who are willing to reach out and ask for help.

Use the Project Semicolon website to find resources to help those who may have a problem, and always be supportive of anyone who may be at risk of suicide.

The Symptoms and Treatment of Depression

How Does TMS Therapy Work for Depression?