ADHD – which causes symptoms such as difficulty staying focused or paying attention, problems controlling behavior or mood and bouts of near manic energy – is one of the most common childhood disorders. When the subject of ADHD or attention-deficit hyperactivity disorder makes the news, most people associate the mental health condition with children. They’re not entirely incorrect either. Even so, children grow up, and there are many successful celebrities and famous people with ADHD, who live with the condition into adulthood.

However, the National Institute of Mental Health estimates that around 4.4 percent of adults in the U.S. – more than 14 million people – also cope with ADHD.

It’s more common among men, though women can also experience the condition. Adults with undiagnosed or untreated ADHD are more likely to self-medicate with drugs and alcohol and develop a secondary condition of addiction.

The combined conditions are often referred to as a dual diagnosis or co-occurring disorder. Lasting recovery is only possible when both conditions are managed through treatment.

As exemplified by the people on this page, it’s possible to overcome the effects of ADHD and find great success in life in a wide range of professions. 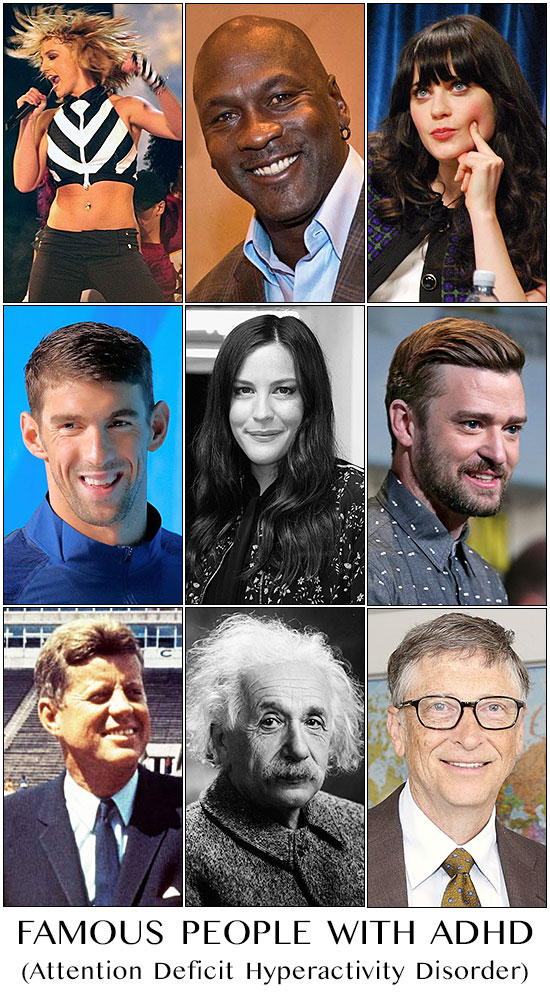 The iconic pop star Britney Spears is one of the most famous celebrities with ADHD and she went public with it in 2012 while she was performing as a judge on “The X Factor.”

Spears, who was diagnosed with the condition as a child, needed to take regular breaks during filming to manage her symptoms.

Perhaps the most accomplished athlete in basketball history, Michael Jordan is known to deal with issues of ADHD.

In retirement, Jordan shifted his high-level energy to a myriad of business investments beyond just the millions of sneakers that bear his name.

Star of the hit show “New Girl,” Zooey Deschanel is another one of the celebrities with ADHD and she revealed her diagnosis on her blog where she said she turned to crafting to help her focus.

Along with her acting career, Deschanel uses her extra energy and creativity to tour and perform with her band, She & Him.

One way to manage symptoms of ADHD is to win more Olympic gold medals than anyone else in the history of the modern games, like swimmer Michael Phelps.

Out of the pool, the Olympian has faced challenges, getting a DUI in 2014 and went to rehab.

“I sent myself down a downward spiral. I think it was more of a sign than anything else, that I had to get something under control,” Phelps said in a 2016 interview.

Liv Tyler, perhaps most well-known as the daughter to Aerosmith front-man Steve Tyler, but an accomplished actress in her own right, uses meditation to cope with the symptoms of her ADHD.

An Elven Queen in “The Hobbit” films, she said in an interview that relaxing meditation helps with everything.

Another pop icon, Justin Timberlake, who got his start on as a child on “The Mickey Mouse Club,” suffers from both OCD and ADHD.

The famous musician doesn’t talk much about his conditions, but in an interview with Collider he said of his disorders, “You try living with that.”

Revered President John F. Kennedy famously had difficulty with concentration and reading during his school years.

Though the term attention-deficit hyperactivity disorder wasn’t included in the third edition Diagnostic and Statistical Manual (DSM-III) until the 1980s, historians believe JFK would have been diagnosed with both ADHD and dyslexia.

Developing the theory of relativity isn’t something a person with difficulty concentrating would normally do, but Albert Einstein who was notoriously distracted did just that.

Along with ADHD, some scholars believe Einstein also suffered from Asperger’s syndrome.

– With an estimated net worth of $92 billion and the creator and founder of Microsoft, Bill Gates has admitted he’s struggled with ADHD, saying that he always had trouble learning things.

Gates now channels his focus on philanthropy with the Bill and Melinda Gates Foundation.

Living with a learning disability like ADHD may be difficult for children while in school, but many successful people have overcome their childhood challenges and channeled them into thriving careers in sports, science, entertainment, business, and even politics.

Sometimes a struggle in one area becomes an advantage in another. It’s important to look beyond the negatives and find the positives and use them as assets for succeeding.