Getting High on Xanax: A Benzo Buzz or Bummer?

The reason benzodiazepines, such as Xanax, are popular is because they work. The sedative effect suppresses neurotransmitters in the brain responsible for fear, worry, and a sense of danger.

The medication also boosts confidence. So, for patients that suffer from panic attacks or other anxiety disorders – around 40 million adults in the U.S. – a benzo prescription can be a lifesaver.

In fact, Xanax is at the top of the charts in the U.S. as it relates to the number of prescriptions – almost 50 million – doctors write each year. 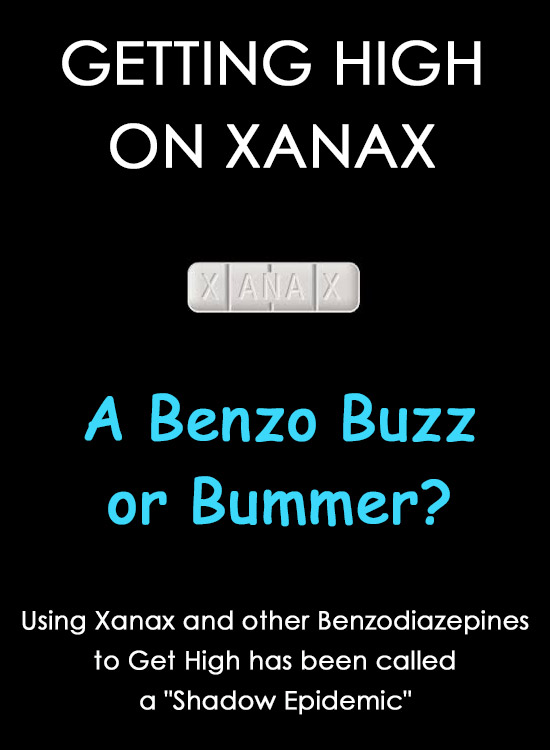 It should come as no surprise then that when something makes people feel good, they want more of it.

People who take more than the therapeutic dosage of alprazolam, the generic name for Xanax, report a mellow sense of euphoria, a relaxed high combined with a great feeling of confidence and that’s where the problems can start.

“The risk of overdose and death from benzodiazepines themselves is generally low-to-moderate in otherwise healthy adults,” Dr. Gary Reisfield, a University of Florida professor of psychiatry, told CNN, but added that as a person’s tolerance develops and they use other substances, such as alcohol, with benzo’s, “their lethality is magnified.”

Under the influence of Xanax, the central nervous system is depressed, which slows the heart rate down and limits breathing. This makes the body incredibly vulnerable when combining other substances, like Xanax and alcohol or opiates, that double down on these effects.

This is one of the reasons that using Xanax and other benzodiazepines to get high has been called a “shadow epidemic.”

The rate of fatal overdoses has steadily risen to an estimated 9,000 benzo-related deaths in 2015, according to the National Institute on Drug Abuse (NIDA), second only to opioids.

Xanax comes in various pill forms, from .05mg all the way to 8mg tablets that come in serrated 2mg sections. The latter is commonly referred to as Xanax Bars and are coveted by recreational users looking to get high on the drug.

Nonmedical use ranges from ingesting the drug orally, snorting it, and even crushing the pills and cooking it down to liquid form for injection.

Dependency and addiction are among the many risks of recreational and medical Xanax use.

A 2014 study reports that among long-term benzodiazepine users, 10 to 25 percent become dependent on the drug.

Developing a physical and psychological dependency doesn’t take long either. Users can start experiencing physical withdrawal after just three weeks on the medication and kicking a Xanax habit is not the most pleasant way to spend one’s time.

Withdrawal from Xanax can include some of the following symptoms:

“With opiate addiction, you can tell people they’re through the worst of it after two or three weeks,” Jack Abel, a rehab therapist at Caron Clinics, said in an interview with HuffPost.

“That’s not true with benzo’s withdrawal. With benzos, the brain has more difficulty regulating, and withdrawal is especially agonizing.”

It’s very important never to quit benzodiazepines cold turkey and follow the doctor’s directions for tapering off use. Benzodiazepine Detox should always be administered by a trained physician.

Getting high on Xanax, even if it’s every now and then, is likely to lead to a myriad of problems physically, emotionally, personally, and professionally.

The stories of people who wrecked their lives on the drug are too numerous to count, but the consensus from people who made it into recovery is that Xanax is definitely a benzo bummer.

What are the most commonly prescribed Benzodiazepines?

Inspire Malibu is the premier Non 12 Step, drug, alcohol, and detox treatment center in Malibu California led by our board certified addiction specialists. Our state-of-the-art treatment program combines the latest scientific research with proven, evidence-based therapies to address both alcohol and substance abuse successfully. Inspire Malibu is Joint Commission (JCAHO) accredited and has been designated a Higher Level of Care from the Department of Health Care Services. We are also uniquely qualified to address dual diagnosis disorders.
PrevPreviousCocaine Laced With Fentanyl. It’s Not Just a Heroin Problem Any More.
NextXanax High: Is it a Benzo Buzz or a Bummer?Next