Alcoholism has the capacity to destroy a person’s personal and professional life. An estimated 16.6 million adults in this country have alcohol use disorder, reports the National Institute of Alcohol Abuse and Alcoholism (NIAAA).

Less than 8 percent of that population will receive treatment for the disease of addiction. As a result, some 88,000 people die each year from alcohol related issues.

In the United States, one in 10 children live in a household where at least one parent has issues with alcohol, which increases the risk that they will also develop substance abuse problems. The chances are that most people know someone with a drinking problem.

With such a significant reach, it makes sense that alcoholism and alcohol abuse are prevalent themes in the American film and documentary culture. 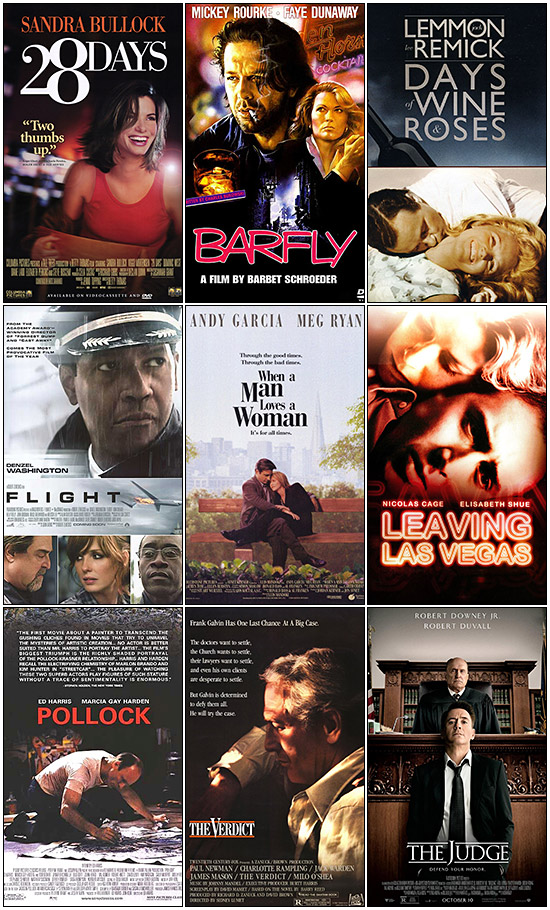 28 Days was released in 2000, and stars Sandra Bullock as newspaper columnist Gwen Cummings. After crashing a stolen limousine, Gwen, a troubled drinker, is given the choice of 28 days in jail or going to rehab.

With an all-star cast of actors, including Diane Ladd, Steve Buscemi and Viggo Mortensen, the film got the number two spot in it’s opening weekend.

Barfly is a semi-autobiographical work from 1987 and written by Charles Bukowski, an American poet that Time magazine referred to as a “laureate of American lowlife.”

Mickey Rourke plays Henry Chinaski, an impoverished alcoholic who does odd jobs in an effort to fund his drinking. Wanda, played by Faye Dunaway, befriends Chinaski. A very raw portrayal of alcoholism, the film appeared in the Cannes Film Festival and garnered both Dunaway and Rourke award nominations.

3. Days of Wine and Roses

With four Oscar nominations and one win, Days of Wine and Roses is a film classic that stars Jack Lemon and Lee Remick as an ordinary married couple in San Francisco that succumb to alcoholism and struggle to regain their lives when they reach rock bottom.

Released in 1962, the film’s tagline read, “This, in its own terrifying way, is a love story.”

Flight is a gripping film filled with amazing performances.

Denzel Washington stars as William “Whip” Whitaker Sr., an alcoholic and drug addicted pilot that crash-lands an airliner after a mechanical failure and saves almost everyone onboard.

After the crash, however, Whip’s life takes a turn. Released in 2012, the film received Oscar nominations for Best Actor and Best Original Screenplay.

5. When A Man Loves A Woman

Co-written by Al Franken, When A Man Loves A Woman is a 1994 drama starring Andy Garcia, Meg Ryan and the late Philip Seymour Hoffman among others.

Alice Green, played by Ryan, is a beloved wife, mother and school counselor who becomes incredibly reckless and violent when she drinks. Her husband, played by Garcia, attempts to confront her alcoholism after an accident in the house that sends her to the hospital.

Leaving Las Vegas is based on a semi-autobiographical novel of the same name, that features Nicolas Cage as Ben Sanderson, a Hollywood screenwriter who goes to Vegas with the intent of drinking himself to death.

While there, he is befriended by a troubled prostitute, played by Elisabeth Shue. Cage received a Golden Globe for his role in the film. Sadly, John O’Brien, who wrote the novel, committed suicide shortly after the film began shooting.

Pollock highlights the intersections of mental illness, alcoholism and creativity, and received positive reviews from critics in 2000, when it opened.

Paul Newman plays Frank Galvin, a disgraced ambulance-chasing attorney with a drinking problem in The Verdict.

As a favor to a former teacher, Galvin takes a medical malpractice case with the intention of settling out of court, but is deeply moved after visiting the comatose woman he’s fighting for. A box office success in 1982, when the film was released, it also received five nominations at the Academy Awards.

Premiering in 2014, The Judge stars Robert Duvall as Judge Joseph Palmer and Robert Downey Jr. as his son, Hank Palmer.

In an emotional and heated twist of fate, Downey defends his father against first-degree murder for an alleged fatal hit and run while the Judge was blackout drunk. Duvall received nominations for Best Supporting Actor from the Golden Globes, the Screen Actor’s Guild and the Academy Awards.